My journal and my life 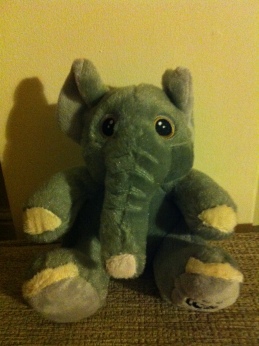 As mentioned in my last post, on impulse I signed up to adopt a tiger on the WWF website.  As this only cost a few pounds per month & as I’d seen a news report about the dreadful poaching of elephants, I wanted an elephant as well.  How can anyone kill such magnificent & noble creatures?  It brings tears to my eyes, but the soft toy reminds me that I’m doing a little towards protecting the species.

Kiruba is around 40 years old with a son called Anand & a daughter Tula.  She’s the matriarch of a tribe of about 20 elephants living in the Corbett National Park at the foothills of the Himalayas in Northern India.  The population of Asian elephants hasn’t declined quite as much as the tigers as there are approximately 40-50,000 left from 100,000 in the year 1900.  They are still on the endangered list though & there’s nothing quite a cute as a baby elephant is there?

They make good soft toys – when we were babies, my brother didn’t have a teddy bear, he had a cuddly toy elephant called Empt, which he carried everywhere holding onto his trunk 🙂